The Shadow of the Wind Poster 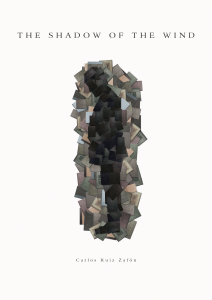 This was a poster created as part of an assignment to design posters and a cover for one of a selection of books. The book I chose was ‘The Shadow of the Wind’ by Carlos Ruiz Zafon, a story set after the Spanish civil war about a young boy who discovers an obscure book in an old archive and begins to be followed by a shadowy figure claiming to be a character from the book. I choose to focus on the old books and the shadowy figure as they are the two major plot elements that drive the story forward.

To create the image, I started by taking photos of old and leather-bound books I had around the house and importing them into photoshop, where I isolated them and created several copies with different hues applied to the so that there would be more variety in the books. To create the outline of the figure, I used a picture of myself in the pose that I wanted and used it as a guide for placing and sizing the books in individual layers. One I had completed the figure, I layered the brighter pile of books under it until I felt that I had a suitable ‘aura’ around the figure. Once I completed that, I went through the layers of books and reordered them so that books looked as if they were laying on top of one another. Finally I added a slight drop shadow effect to each of the books to give them more depth and placed the image on a paper-coloured background to continue the theme.

I’m particularly proud of this image as it was a concept that I came up with and executed on my own and it was very much a labour of love. The image went through several different versions before I was happy with this one and I believe that this was some of the best work that I created in the first year of my degree.